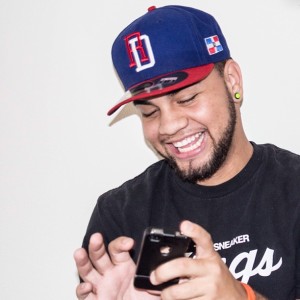 Juan Atiles is better known to his close to 400,000 followers (and counting!) in the social media world as LeJuan James, in honor of his basketball idol, Lebron James. Born of Puerto Rican and Dominican descent, the young comedic actor made his atmospheric leap into the public eye with gut twisting skits portraying Hispanic culture and its community. Inaxxs’ own Manuel “JBlaze”Garcia had the opportunity to sit down with LeJuan James to find out what made him drop everything – school, work, etc. – to do it for the vine.

mg: do you remember the moment you realized that using your phone to make videos was bigger than something that was just cool to do?

leJuan James: I always remember that. I’ve been able to change my life, not only for myself but for my family. I was able to put myself in a position to be successful off of social media. Honestly, I got started on Vine. I was playing around. It wasn’t something that I was thinking about doing. I was a full time student/full time retail manager. I wasn’t really thinking about it. I got my family involved and people started gravitating to it. When I started seeing that I was a couple of weeks in and then a couple of months, the type of energy and attention that it drew, that it forced me to dedicate my life to entertainment. I had to leave my job and school. I had to drop everything. Everyone I knew was looking at me crazy. I had never been the type of dude to take risks, but I took a leap of faith and everything is turning out really good for me and I’m really excited.

mg: give us an inside look at the typical day in the life of leJuan James. you made a radical jump – a leap of faith as you said. what’s the inside scoop? do you write something up to post on instagram?

leJuan James: To be honest, my days are really laid back and chill. There isn’t a routine or schedule for my content. I feel the real creative content comes out when it isn’t forced and it’s not overthought. I can be watching something and get to thinking about it. For instance, I just happen to be scrolling through the internet and saw The Simpsons and thought about how funny it would be if I reinvent it from the Spanish culture point of view. The content comes out much better when it’s not overdone. I make sure that the content is relative to everyone and has humor. The day in the life of LeJuan is chill.

mg: with everything that has happened for you over the past year with vine, are you ‘programmed’ now? is everything you see and experience something you immediately translate into an vine video? do they come at any moment?

LeJuan James: Yeah, my body and my mind is programmed. I mean, me personally I have to come up with content everyday. I’m not stressing over it. I don’t mean to sound cocky, but it’s the confidence in me that I know I’m going to deliver something good that the audience wants. I see my following and how fast it’s growing. I pay attention to what the public wants and the perception of what to humorize. I’m very conscious of my image, the things that I do, and what people are saying. I study social media as if it were a job. It’s a science to me. I have particular times to post, particular passions, and certain things I want to talk about. It’s a business at the end of the day.

mg: let’s talk about the phone. everyone talks about how funny your videos are. i thought it would be dope to talk about how important your phone is. i have a two-part question: 1. how important is your phone and have you changed your phone? and 2. if you talked to a phone company, what would tell them to change for people to better interact with social media?

leJuan James: Cell phones are extremely significant. 99.9 percent of the population cannot function without their phone. When I was growing up we didn’t have the phones that we’ve have now. I see kids in school with the new iPhone 6. Generations are evolving and the phone is part of their lives. I have been able to impact hundreds of thousands of people through a device that was originally created to communicate from Point A to Point B. It’s an integral part of my life and everyone else. As far as companies helping to better interact with social media, third parties have done this. Twitter, Vine, Snapchat, etc. These third party platforms have given me the opportunity to get ahead. This is America and this is a place where you can make your own dreams. I mean, I wake up everyday and feel blessed because I have been able to take advantage of opportunities through a phone. There is so much interest in cell phones that it gives the public more interest in me because all of my work is through a phone. You’re always connected to LeJuan James. Whether it be Instagram, Vine, Snapchat, and now I’m working on some stuff for YouTube. You just have to make sure you’re marketable. You have to continue to evolve yourself.

mg: i know that family is very important to you and plays a very vital role in your life. hispanics are pretty private about their lives. give me a word that describes each one of your family members that are included in your videos.

leJuan James: Everything that has happened to me and has got me to where I am now is my family. When you see you videos, you see the bond. I have a traditional family that really loves each other. Without their unity, I would never be even where I am now.

i get people from all walks of life being able to identify with my work and i’m very proud of that. that’s what resonates with me and there’s no dollar amount that can change that.

mg: tell me about your videos. i checked out your youtube and you do a pretty dope job at acting. what’s so cool is that it relates past puerto rican and dominican culture. they’re hilarious and the comedy is clean and i was thinking that there are so many out there who do things on youtube that is really edgy. why did you make the decision to keep it clean and so far what has it shown you?

leJuan James: I know I represent Hispanics. There are stereotypes and I want to break those barriers. I don’t want to be another stereotype. I want to show that Hispanics can be educated and progressive, be about their families, and want to get ahead. Specifically in the comedy department, some feel like they have to curse to bring humor, degrade females, or to talk about drugs and crime. At the end of the day that’s not what I represent. A big portion of that is the way I was brought up. I refuse to let society change my mindset. I get people from all walks of life being able to identify with my work and I’m very proud of that. That’s what resonates with me and there’s no dollar amount that can change that.

mg: let’s talk about the pressure. is there any to constantly bring out content that is relevant and funny?

leJuan James: I try to live one day at a time. I know many people have high expectations of me, but I just focus on the next thing.

mg: what is the future of leJuan James beyond just doing vine videos? i know you done some hosting of parties, done some stuff with univision orlando. how do you see leJuan James five years from now?

leJuan James: As far as the future, we have a lot going on. I invite people to check me out on all social media platforms. It started out with the videos and now we’ve been able to branch out to other platforms. I’m right now on a TV station every Sunday, working with Telemundo on some things, and quite a few other things. The sky is the limit. I don’t want to just label myself. I’m an entertainer. I want to be in movies and TV shows. I want to be able to do everything in my ability. It’s a year in October that I left my job to go on this voyage and I’m looking forward to what’s ahead.

mg: what team are you on? iphone or android?

leJuan James: Listen, I’m on both. I shoot all my videos on iPhone because the video editing is better. I use my Android to talk on. I win all the time. (laughs).