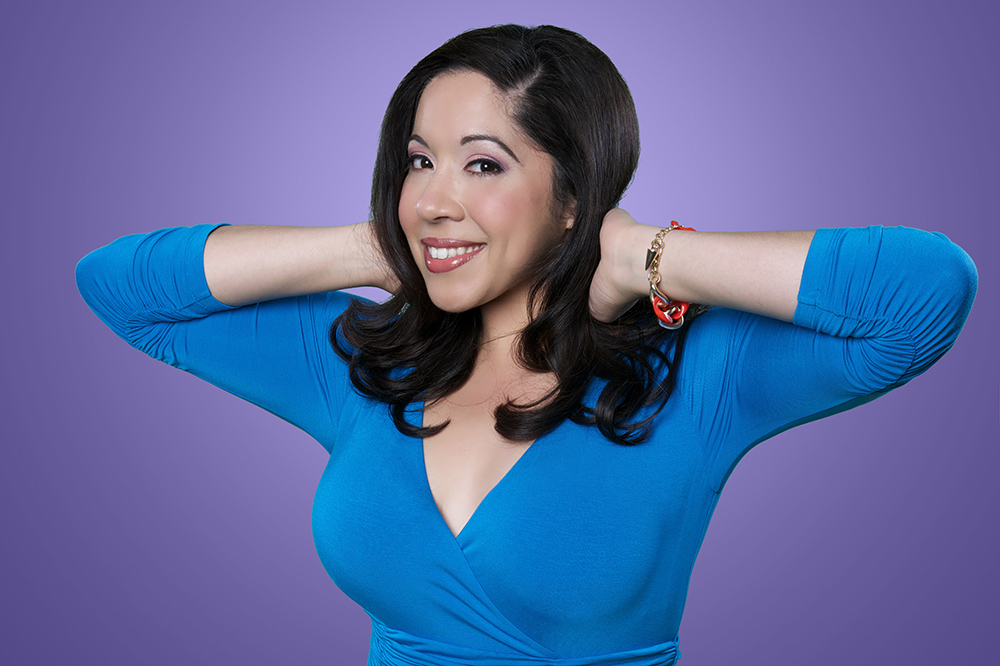 Comedian Gina Brillon has been cracking jokes since childhood. A Bronx native, Brillon has entertained audiences from Montreal to Los Angeles, headlining at some of the top comedy hot spots and appearing on network hits like Comedy Central, Chelsea Lately, and The View. In 2012, Brillon made history, becoming the first—and only—Latina to win NBC’s Stand Up for Diversity Showcase. Poised to star in an upcoming sit-com produced by Kevin James, Brillon spoke with us about the inspiration—and the power—behind all the laughter.

LC: How did you discover you had an interest in stand up comedy?

Brillon: I was the goofball that always tried to make everybody laugh—even my parents, when they were mad at me. I love entertaining people. I fell in love with standup at 14, and I was ready to do it then. At 17, my mom entered my twin sister and me in a contest. The rest is history.

LC: What comedian would you say most inspired you at the beginning of your career?

Brillon: Bret Butler was the first. In the Latino community [at that time], you didn’t see a lot of women on TV doing anything but dressing scantily clad or literally dressing up as clowns or posing as sex objects. Here was this beautiful, blond Southern woman on stage, commanding a room full of people with nothing but these really witty, intelligent jokes. I saw her, and I knew that’s what I wanted to do.

Brillon: I fell in love with George Carlin and became a huge fan. He went through so many changes throughout his career. He went from a hippie comic to a social commentator. It was really interesting to watch his artistic evolution. From there, I basically became a comedy nerd. 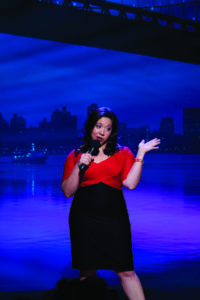 LC: You’ve been doing standup for over a decade now. Do you ever get nervous?

Brillon: You know; it’s funny. I was performing last night in a club in Canada [where I’m] headlining this week, and the feature act was so nervous. He was panting and pacing back and forth, and I said to him “You are the physical embodiment of me internally.”

Over the years, I learned how to control the anxiety and fear and put them in a different place. They never go away. Comedians are all inherently perfectionists. We want the perfect laugh. We want the audience to love us, so the fear that is not going to happen is never going to go away. But after years on stage, I learned how to control the room and fix the situation. Now, instead of pacing back and forth and panting heavily, I find this calmness within the anxiety. I’m probably the most nervous when my name is called to go out onstage. I think, “Oh, that’s me. I have to get up there. Oh my God. It’s happening now.”

LC: In your stand up, you talk a lot about relationships. Why do you choose relationships as a focus for your comedy?

I feel like relationships connect us. I want to connect with somebody who is not of my race, my religion, or gender and have them agree with me on certain things. It feels really good to connect a room of people and have them see that despite our differences, we go through some of the same things, too.

LC: There certainly are a lot of jokes about current events and cultural and gender stereotypes lately. Do you ever focus on anything like that?

Brillon: I didn’t want to stick to subjects that divide people like politics or topics that only fellow Latinos would know. Those are great things to talk about, and they’re a great way to educate people about Latin culture. But when you do that, you alienate a part of the crowd that thinks that you’re not speaking to them; and they start to tune you out. A lot of my audiences are diverse, mainstream audiences, and I had to find a common ground because I’m trying to convince a roomful of people they should listen. They need to know why. I like to talk about my life and how things change because I feel like everybody goes through similar changes. 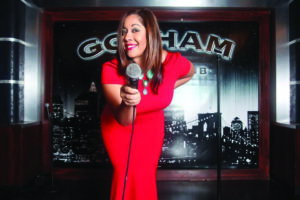 LC: It was your stand up—and your content—that eventually led you to become the first Latina to win NBC’s Stand Up for Diversity Showcase in 2012. What was winning that like?

Brillon: I was very proud and happy, but I didn’t expect to win. I actually hate comedy competitions. That was my third try. I was asked to participate, and I didn’t want to do it. But as much as I hate comedy competitions because they’re nerve-racking and a lot of pressure, they are necessary for business. I got a manager and an agent. The people at NBC were very supportive, and I still have a really great relationship with them. I met a lot of strong Latin women at NBC that were right beside me—supporting me—and I really appreciated that.

LC: You mentioned winning helped you secure a manager and an agent. What else did it do to develop your career?

Brillon: For any comic, it’s a very lonely job in the beginning because you are the manager, the agent, the tour manager, the personal trainer, and the personal chef. When I handed over the reins to people that have more connections, it let me concentrate on being creative. Having a good manager and a good agent have opened doors for me that I never could have opened by myself. A lot of the entertainment business relies on relationships with people; and because of my management team and my agency, and I’ve built tons of great relationships. I have a wonderful team of people, and most are women, which is also wonderful. They understand the trials and tribulations of facing the stereotypes of women—especially in comedy. It’s also nice to have people that listen to me. I feel a little more protected because I know they’re looking after my best interests.

LC: You’ve really branched out beyond stand up. In fact, you will be starring in a new sitcom produced by Kevin James. I read that content for the show has been heavily influenced by your stand up. Can you tell us a little bit more about this project?

Brillon: The concept for the show is an idea I’ve been working on for quite some time. It is about a Phoenix rising from the ashes— the idea of somebody starting their life over. I feel like everybody at some point has been there, and it’s really important to tell that kind of story. I fell in love with the concept of telling my story to people and having them relate to it.

LC: How did you end up working with Kevin James?

Brillon: Kevin and his manager saw some of my stand-ups, and they said, “wow, we absolutely love her. We want to develop a show with her.” So, we met, and they paired me up with Adam Barr, who is a phenomenal writer. Adam totally got the point of the story. He helped me turn it into something that could be palatable for TV. We’re still in the beginning stages. We sold the show to CBS, and now we’re waiting for when it can move forward. Producing a show is a very complicated process, much more involved than people think. I believe in the project, so you will see it someday. I just don’t know exactly when.

LC: Can you tell me a little more about the premise of the show?

Brillon: It’s very loosely based on a breakup that I went through with a guy I was with
for seven years. It was a very unhealthy relationship. I thought it was headed towards marriage, and it wasn’t. When we broke up, I lost everything. I lost the place that I lived; I lost the church I went to; I lost someone I thought I’m going to be my family. At 34 years old, I was starting over again, being single, moving in with my brother and trying to find my footing. I want to emphasize it’s very loosely based on that experience. But I really loved that concept for a show like this. We all have had a loss that forced us to start over in some way—some kind of loss that carries us to someplace new.

LC: In the meantime, you’re traveling a lot. Where is your stand up tour taking you these days?

Brillon: I’m pretty much all over the country. I’m currently in Vancouver at The Comedy MIX here. My next stop will be Denver, Colorado at The Improv. Then, I’ll be doing Asheville, North Carolina and then traveling to Aruba. Later, I’m in Scranton, Pennsylvania, Michigan, and then Texas. It’s a busy time for me, which is great. I’m performing a lot and having fun doing it. I love living in that space of wanting to be on that stage, connecting with my audience, and meeting people after shows. I have a lot of touring coming up, and I’m enjoying it all.

LC: These days, it seems like Americans are bombarded with negativity, especially when we turn on the TV. I think that people are searching for opportunities to laugh and to remember to enjoy life. You make people laugh for a living. Beyond that, how do you see your role as a comedian?

Brillon: To me, being a comedian goes far beyond just making people laugh. I’m connecting strangers by a common thread, and that holds a lot more weight than I think a lot of comedians even realize. Right now, everyone is tense. People are divided and angry. They are scared and upset. They look to comedians to feel better and to make sense of it all. In essence, comedians are the ultimate observers. We stand perched on a branch like a bird, watching society and the world, taking notes on the ridiculousness that we see. The way that we make one side understand the other is by pointing out the discrepancies on both sides. That connection can heal a lot of the anger and a lot of the fear—even if it’s just for an hour. It is a wonderful gift to relieve someone’s sadness, fear or pressure. I love to make people laugh— and realize that no matter what is going on today, the sun still comes up tomorrow, and the world goes on.

“We all have had a loss that forced us to start over in some way—some kind of loss that carries us to someplace new.”

For more information on Gina Brillon, her comedy, and her upcoming tour dates and locations, visit ginabrilloncomedy.com.